I have recently been lucky enough to get an FCP keyboard cover for my MacBook and it’s working out very nicely! 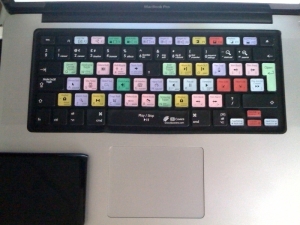 I can use the keyboard like a piano whilst working with AVID but for some reason, with Final Cut Pro, the keys have never stuck.

However that will change now!

The best thing about it is that it’s not another piece of large kit you have to find another bag for in order to carry it around, like my mouse or external hard drives.

It simply fits nicely on your keyboard, doesn’t put any pressure on your laptop screen when closed and the rubber backing means it doesn’t move an inch either in transportation or during usage.

Wow! It seems I have been watching a little too much CNET.

Anyway, back to editing now. Stay tuned for another new blog out very soon.

Today I have been editing together the clip.

Using keyframes and Photoshop, I’ve decided to scroll the either / or questions along the bottom and Josh answers them.

The problem I found at first was that you could clearly hear my voice, despite my position behind the directional mic. I think I’ve just got one of those travelling voices.

Anyway, you can relax as I simply went back to the location and filmed wild track. Usually I film wild track at every location, but with this one being right outside I didn’t think it was necessary. Typical that I would need it this time! Thankfully the weather hasn’t changed in London for three weeks.

Now, I am just about to mix the audio tracks together and hopefully the edit will be up on Monday morning!

It’s now very apparent that I can’t blog AND script at the same time!

I started out quite well with my Scriptwriting Frenzy, but then lost a few days because of filming and celebrating birthdays. This has meant that I am now writing around 4.5 pages a day in order to keep up with the schedule.

It could be worse…it could be a case of writing something from scratch with just a week and a half to go!

I have also been filming with Josh Dubovie, our hopeful for Eurovision 2010.

I filmed behind the scenes on Wednesday and Thursday, following Josh during his rehearsals.

Then I planned an interview on the Friday morning so that he could talk about the rehearsals and the footage that I had already shot could be used as ‘paints’ to illustrate what Josh spoke about.

I then needed to edit the package together and comply it on Friday afternoon so it could be published.

(Needless to say that the interview was rescheduled for the Thursday afternoon instead. Great as it gave me more time to edit the package. But it meant I had less time to think about the questions.)

Shooting to edit is a very important technique when you have such a small time frame. For example, with this interview I threw some ideas around on the Wednesday afternoon after the first lot of filming to come up with two ‘safe’ options I could talk to Josh about.

These ‘safe’ options couldn’t give away anything that was taking place with the staging.

I chose to ask Josh about being in TVC and the simple dance routine he had been practising.

This consequently meant I knew exactly what to film during the behind the scenes.

I was given a brief to edit a mashup of judge comments for So You Think You Can Dance 2010. A little like the edits that Casetteboy produces:

I love Casetteboy’s stuff and was so excited to see him in the BBC talking about winning The Virtual Revolution.

After a mammoth digitising session I was able to move on to subclipping the judges comments.

Whilst subclipping, I used what the various judges said to name each clip. This meant that I could print out the bin and piece together sentences like a giant word jigsaw puzzle.

With a little help from Post-It notes, I was able to clearly see each sentence.

To give the edit a twist, I then replaced the actual footage with key words that each judge said.

It was an interesting way of working as it meant I could practice my title tool and keyframing.

The mashup edit will be available on Monday for everyone to watch.

I hope you enjoy!

As ever, these are my own opinions and views and not those of my employer.

Tagged AVID, Casetteboy, So You Think You Can Dance, SYTYCD

It’s been almost a week since my last post and I apologise for that. With a weekend shoot, a birthday and an illness to contend with, my blog unfortunately took a back seat.

Ah yes, the shoot with Tommy and Lizzie from SYTYCD went really well and ran smoothly; in and out in 20 minutes.

Both Tommy and Lizzie were lovely and really helpful. They had clearly been filmed a lot in recent weeks, as they didn’t have to be told twice about putting a question in the answer.

I did have to ask Tommy to repeat one question, as I realised I hadn’t framed the DG logo out correctly. He was fine to do that and it meant I didn’t have to spend hours blurring it out in post production.

I shot it on Z1 and used dedo for catching the interesting brickwork in the background. The actual room was well lit with natural light because it had large windows.

I sat the two interviewees facing slightly away from the windows so they were softly lit.

Once the interviews were done, I went back to the office and edited the footage together using AVID.

By the end of the day the interviews were ready to be viewed online.

It was an interesting difference to the day I was about to have, filming for Dragons’ Den Online using a DSR 450 camera.

Ahh back to the big boys! How I’ve missed those cameras…

SYTYCD Recap… have that!

Today I finally completed the 60 Second Recap, got it signed off and finally published. Who said that persistance and pestering piss people off? They get the job done and that’s the important thing!

Also, the collection of words give great alliteration.

OK, so now for a bit of geek. Please scroll down to the next piece of text in bold if you don’t fancy the following…

I think the Firewire connection has been damaged somehow on the J-30 at work.

It means I have to be a little crafty and wire the Digi deck to the DVCam deck with a Composite Video A/V Lead so that I can connect the DVCam deck to my laptop and use this to digitise.

Great news regarding a short term fix for digitising.

Bad news because it means I don’t get the correct timecode and have consequently found it quite difficult when syncing the multicamera footage for the Learn to Dance tutorials.

It usually means I have to find a piece of obvious audio wave that is visually noticable, so that I can use as a point to mark. Then, because I use AVID, I can go to Bin > Group Clips > choose inpoints to sync the camera angles.

It’s fidley but not the worst thing that could happen.

I’m now on to organising a shoot for Friday afternoon with Lizzie and Tommy from this years SYTYCD. I’m interviewing them about their experiences during the series and will hopefully be eiditing this on Friday afternoon ready to publish ASAP.

Although the ASAP may have to be AS(as I can do it) as I’m back up to Manchester this weekend for other filming on Saturday.

Have you figured out what it is yet? I promise I’ll let you know in due course.

There may even be pictures!

Answers on a postcard… or alternatively you can tweet me your suggestions.